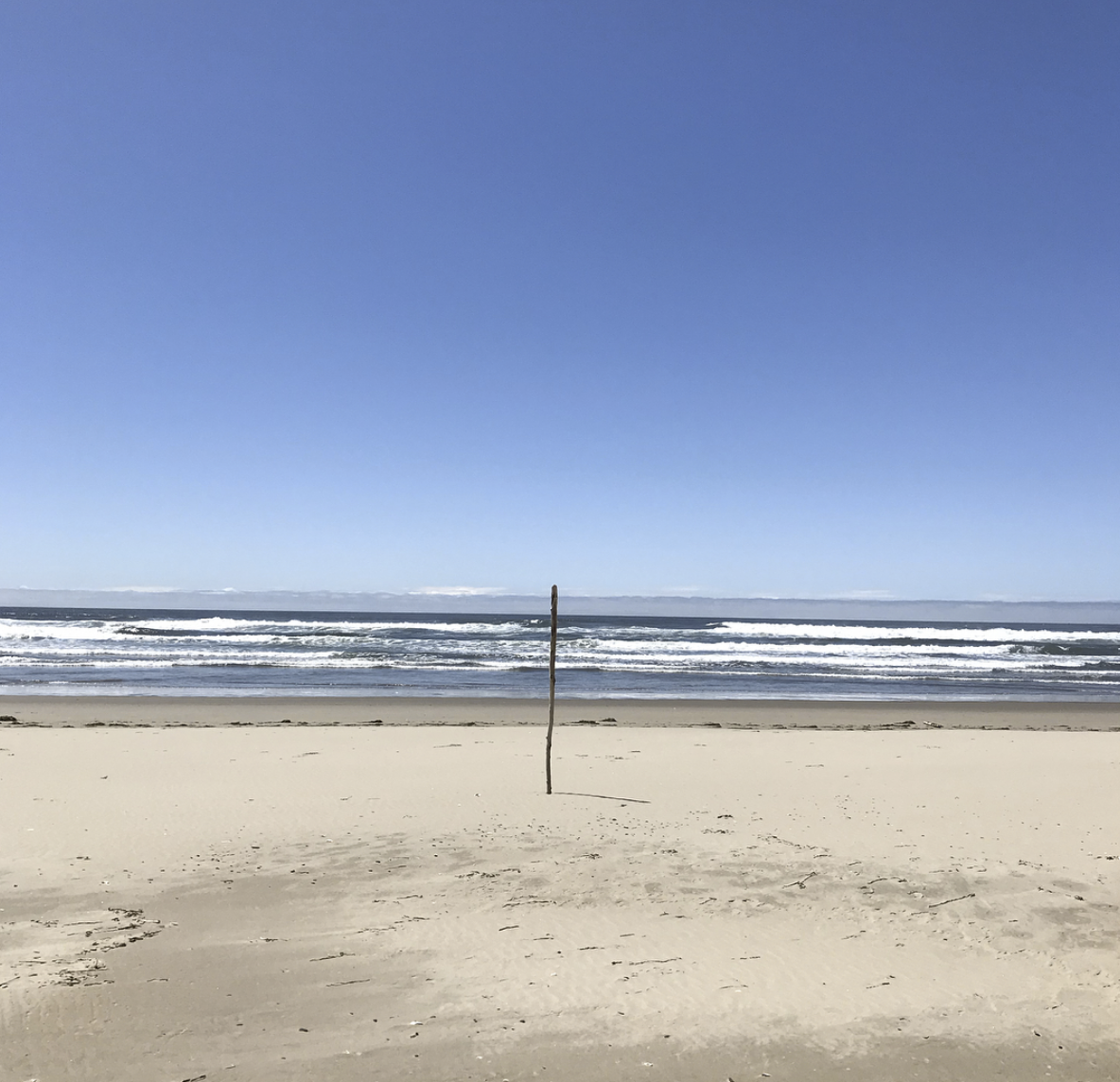 Today we went to our favorite trail, Bayocean. This trail is located by Tillamook and is a part of a ghost town that disappeared some time ago. Founded by T.B. Potter in 1906, the town was sold and resold few times and finally become forgotten and obliterated by 1960. There is no trace of it left except one open space where you can see a foundation of one building eaten by sand. You can find it’s complete history in Guardian article. Now it is a beautiful hiking loop around the spit (it’s a very skinny peninsula) which on one side goes along the Tillamook Bay and on the other — Pacific Ocean. Two sides — different worlds.

The weather was good, sunny and warm in spite of a chilled wind. We started on the bay side and finished the loop along the Pacific. I love this trail because there are always very few people on it and mostly on the bay side. The beach is virtually uninhibited by other hikers — miles of solitude just us and the ocean. It is my go-to place when I feel overwhelmed by the sounds and smells of the city.

Opee, after being skeptical about the ocean on first two hikes grew to like the freedom of frolicking on the beach chasing birds and eating crab shells. About time, I say. It was great to take my shoes off and walk on the hot sand intermittently dipping my feet into the wavy water of the ocean to cool off. Pure Zen. I’ve read somewhere sometime ago that walking along the ocean enhances the feeling of well-being. I find it to be true. Once after the hike there, I had to go to Trader Joes (to get a bottle of wine, of course) and the clerk commented on how serine I was. Although it was a strange comment I took it as a compliment and since then pay attention to the improvement of my mood by the ocean’s goodness.

We almost never see people along the hike. However, this time we came across a gnome of a gentleman equipped with a white beard and a pointy hiker’s hat with drooping rims. He was sitting quietly on a scarce bench overlooking the bay holding a cell phone in front of him. The picture was almost comical — what is this old dude doing with technology on a sunny day. Turns out he is a local resident who decided to learn German. Because of a loud family, he escaped to the trail to use the Duolingo in a quiet private space. We sparked a conversation about politics after he learned that I am from Russia. We talked about Trump and Putin and Russian influences on American politics. I did not want to be too vocal about how much support Putin has in Russia from ordinary citizens (my sister included) so as not to break his heart. He welcomed me to the country to which I replied that I was living here for 30 years. Saying this scared the hell out of me as it was an epitome of how fast the time flies and that I am not a spring chicken anymore. After my mom passed I developed an acute sense of mortality and occasionally have panic attacks when I look in the mirror. Unreasonable? Maybe, but anxiety is always a response to the irrational. Although I don’t know that noticing aging is completely irrational. In any way, I am glad I am finally welcomed to the US.

To finish on a good note, my mood indeed improved and I was singing in the car on the way home. Opee was pooped snoring quietly on the back seat. We returned home to a circle of frozen pizza which after some treatment in the oven tasted delightful.